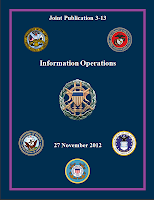 I know that my readers have nothing better to do than read manuals when they are hot off the PDF press. The November 2012 version of JP 3-13 Information Operations (IO) can be found at: http://www.dtic.mil/doctrine/new_pubs/jp3_13.pdf (which is also the picture source). Having just wrapped up a two week stint as the IO SME for an exercise, IO is still top of mind for me.

I learned or relearned a number of things last week – first of all the IO or J-39 needs to be more of a band leader or camp counselor than other staff officers. Even though technically the “39” is the CDR’s IO self, that doesn’t always seem the case because each of the major players feels that they are an entity to themselves. This means the IO needs to be a catalyst to bring about the best mix for the CDR.

The IO tools are never fixed. One AO demands TV while another can hardly read. In others Key Leaders (with Key Leader Engagement emerging as yet another discipline) are best reached via Internet kiosks and smart phones. Which brings me to the only constant regardless of AO – the mobile phone. It appears that no matter where you go, whether urban or rural, developed or not, the cell phone is an important if not the most import means of communication – the way people get or give information.

To be effective the IO needs to know how to use mobile phones as a medium, but also how to deny individuals the use of their phones at certain times or perhaps to alter the messages they receive.

In any event, the information domain evolves each day and MISO remains one of the few ways that a CDR get reach the Target Audience (see Figure from the JP)
A pretty good summary taken from the publication:

“IO is not about ownership of individual capabilities but rather the use of those capabilities as force multipliers to create a desired effect. There are many military capabilities that contribute to IO and should be taken into consideration during the planning process. These include: strategic communication, joint interagency coordination group, public affairs, civil-military operations, cyberspace operations (CO), information assurance, space operations, military information support operations (MISO), intelligence, military deception, operations security, special technical operations, joint electromagnetic spectrum operations, and key leader engagement.”

For those of you that would rather watch football (or soccer) than read DoD Manuals, here are some of the more significant changes from the 13 Feb 2006 version. The order is not mine, but taken directly from the publication. Clearly this is not in order of importance.
Identifies the information environment as the aggregate of individuals, organizations, and systems that collect, process, disseminate or act on information.

Defines information-related capabilities (IRCs) as tools, techniques or activities employed within a dimension of the information environment, which can be used to achieve a specific end(s). 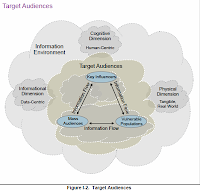 Introduces the information-influence relational framework as a model illustrating the use of means and ways, through the applications of IRCs, to achieve an end(s) through influence of a target audience (TA).

Describes information operations (IO) as the integrated employment, during military operations, of IRCs in concert with other lines of operation, to influence, disrupt, corrupt, or usurp the decision making of adversaries and potential adversaries while protecting our own.

Designates the IO staff as the combatant command focal point for IO and the IO cell as the planning element responsible for integration and synchronization of
IRCs to achieve national or combatant commander objectives against adversaries or potential adversaries.

Emphasizes IO must be integrated into all steps of the joint operation planning process.

Articulates that it is vital to integrate multinational partners into joint IO planning, in order to gain agreement on an integrated and achievable IO strategy.

As always reader comments appreciated and Happy Holidays.
Posted by Lawrence Dietz at 9:52 AM

Is there any way to find out which are the current authoritative publications on IO, MISO, Civil Affairs, IIA, etc.?

I'm not in military (and not a U.S. resident, actually), just writing a piece on the evolution of the term "information warfare".

And right now I've got several dozens of publications, old and new, sometimes even contradicting each other: FMs, JPs, directives, some allied publications, a total mess.

Is there any way to find out which are the current authoritative publications on IO, MISO, Civil Affairs, IIA, etc.?

I'm not in military (and not a U.S. resident, actually), just writing a piece on the evolution of the term "information warfare".

And right now I've got several dozens of publications, old and new, sometimes even contradicting each other: FMs, JPs, directives, some allied publications, a total mess.

Alas I am not aware of a master list. Unfortunately conflicts among publications are very common. Try to construct a diagram showing the points and the source. You can then try and determine whose authority would supercede.