Unless you live in a cave, you know that Elon Musk paid $44 Billion to buy Twitter and then take it from a public company to a private one. There has been more than a great deal of concern about the Twitter platform and the future of the company itself. On November 22, 2022 The Brookings Institute published “The future of Twitter: Four scenarios” (see: http://bit.ly/3UgiaN9, which is also a photo source.)

The four alternatives according to Brookings are:

3.     Technical Problems in Maintaining the Site

Of course there can also be multiple scenarios as well. PSYOPers are information maestros. Just as a symphony conductor blends the sounds of the various instruments together in a symphony, influencers will blend media and messages to orchestrate an effective campaign.

Two other analogies apply here as well. The first is that Twitter is a an information tool. When building a house, the carpenter knows that saws cut wood, hammers are used on nails and screwdrivers are used on screws. The tool has a purpose and is used for that purpose. 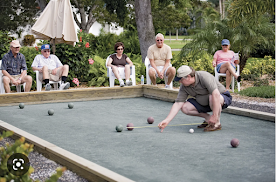 Another way to look at it as like playing a bocce court (Photo source: http://bit.ly/3gFCwlj).

Each court has its own nuances. Most are not completely level all the way around. The skillful player has to know where the court dips and where the ball is likely to go because of the nature of the court.

My point is that no matter which way Twitter goes, it still may useful for influence operations. Assuming for the moment that Twitter scenario number 2. Little Content Moderation and Lost of Extremism comes into being.

Influencers will need to assess if Twitter is an appropriate medium to transmit their message. It is also important to recognize that Twitter could be a source of intelligence on the extreme content and the extreme content’s authors, goals, etc.

People get their information in a variety of ways and successful influencers, like orchestra conductors must learn how to blend the appropriate medium to create optimal effectiveness
Posted by Lawrence Dietz at 9:45 AM