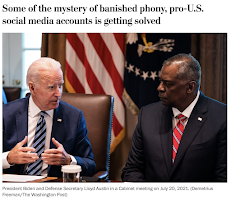 Should the U.S. concede the information advantage to our enemies and adversaries?

This second article was about the discovery and removal of pro-US messaging by Twitter and Meta. That article was sort of an expose of fake online personas to influence internet conversations and spread pro-American propaganda,”.

However, that type of activity was actually reported by the British publication the Guardian on 17 March 2011 (see: https://bit.ly/3dt5WkO, another photo source). This article addressed specific operations being conducted by the US Central Command under a $2.76 million contract with an LA based company, Ntrepid. The company has since moved to Herndon, VA (https://ntrepidcorp.com/) 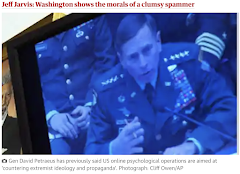 It is clearly no secret that other countries, particularly Russia and China, engage in disinformation using a variety of tactics, techniques, and procedures (TTP) including fake personas on social media.

The most recent article points out that “U.S. law authorizes the use of fictitious substitute accounts, but Pentagon policy and doctrine discourage spreading false information. Congress in 2019 effectively allowed the military to strike back online when countering foreign disinformation campaigns.”

Trying to get a more objective look, I found Gizmodo’s article “The Pentagon is Reportedly Auditing the U.S. Military’s Own Pro-American Social Media Psyop” published yesterday, September 19, 2022 (see: https://bit.ly/3S5OfXF). The closing paragraph of that article is:

“In response to Gizmodo’s questions, a DoD spokesperson sent the following comment in an email, “As a matter of policy, the Department of Defense conducts military information support operations in support of our national security priorities. These activities must be undertaken in compliance with U.S. law and DoD policy. We are committed to enforcing those safeguards.”

Let’s see if we can move beyond the hype shall we?

1.     Our enemies and adversaries are dominating the high ground of the information domain. Disinformation campaigns using automated means by Russia and China in particular have been widely documented.

2.     It appears that US law allows the DOD to execute similar campaigns as long as those campaigns are not primarily targeted to an American audience.

3.     The PSYOP hand has been caught in the information cookie jar on more than one occasion.

4.     Only a fool would allow their enemies to act freely.

5.     There is quite a bit of politics at play here. If I were a cynical person (as I have been accused of being) I would say that ‘someone’ in the White House is very concerned about looking bad especially with the midterm elections literally around the corner.

While of course the U.S. should take the high road, we cannot ignore the low roads or information highway routes being dominated by our enemies and adversaries.

As always, reader comments are encouraged.

Posted by Lawrence Dietz at 2:35 PM

What gives you the indication that the White House or another competitor is perhaps behind this media headline that is circulating as we type? If your suspicion is accurate, it leads me to then wonder... what is this in response to? Or what is it a premature or defense-like response on behalf of the POTUS'or a Corporation's activity in known or unknown collaboration with the military?

Why are these social media corporations exposing potential military operations? Who do you think is attempting to influence public perceptions with regards to POTUS leadership and PSYOP? We know that PSYOP can and will work with POTUS and/or SecDef, etc and then what do you suspect is about to come out or surface that will cause POTUS to appear misleading or needing to back away if is even the case?, Why would he wish to distant one's self from SOF and more specifically, PSYOP? In my view nothing will change, so why and who is even speaking on this to draw media attention?

It does seem like there was some back and forth blame between the military and POTUS with regard to how the Afghanistan pullout initiated by the previous POTUS was executed? Do you think there is some internal conflict taking place between the Pentagon and Executive Branch? And if so, why? Why review PSYOP of all things? This sort of operation, if even true, is to be expected. It is not something that out of interest for our nation's security, that we wish to risk bringing attention to, as that in turn defeats the purpose. Who is exposing this story and why? What is your take since you present such an idea under the label of cynicism? I feel like this should be bipartisan in that national security objectives and all are not to be disclosed in full. Could this have something to do with the former POTUS' criminal investigations? Do you think either the current or former POTUS misused PSYOP and does it relate to what may leak from the documents seized by the FBI in the ongoing investigation of the most recent former POTUS?

Thanks for your time and insights!

Thank you for your thoughtful comment. I am going to respond to it in the spirit in which it was given.

1. Who is behind the DOD probe?
In my experience, senior military personnel such as an Under Secretary do not act serendipitously. They are given guidance and/or orders from those above them. While I have no personal knowledge if the White House ordered the DOD to investigate the program – I’m pretty sure it didn’t happen on DOD’s own volition and was directed from an exceptionally high level.

2. Why did the social media ‘expose’ the operations?
Social media companies were running their normal algorithms for such checking and the activity bubbled up. It didn’t matter what the source was.

However, I think it is fair to say that the U.S. government writ large has an obligation to use whatever legal means it can to further its messaging and positioning and that the Commander-in-Chief is ultimately responsible for what the military does or does not do.

4. Why the review?
The military has an obligation to be apolitical. There is no doubt that the information domain is highly contested and that U.S. citizens have a right to know that their government is following the laws.

5. Wag the Dog?
As to why the investigation is taking such a prominent position in the news – I don’t think it’s part of a giant conspiracy to divert attention from anything or anyone else. Clearly, you are right in the sense that “This sort of operation, if even true, is to be expected.”

6. Cynicism and Sarcasm
I’m a native New Yorker and cynicism and sarcasm are part of the package. Sometimes the attempts to inject humor into a serious subject do not resonate, especially on-line. As you noted by the references I provided, social media has been an ongoing Area of Operations (AO) as a part of the information domain for at least a decade, and operations in that AO are to be expected.

I hope that you found my response helpful.