You Can’t Handle The Truth!

That famous line was spoken by Jack Nicholson as Colonel Nathan R. Jessep in “A Few Good Men” (see http://www.youtube.com/watch?v=5j2F4VcBmeo&feature=player_detailpage).

Now we have another good man, Matt Bissonnette, writing under the pseudonym Mark Owen essentially saying that Osama Bin Laden was not a threat to the Seals who raided his compound.

The issue from a PSYOP perspective is not whose account is correct, but the impact on the world audience seeding yet more doubt about the US and our motives.

Clearly a killing in self-defense, even on a raid that some (like the Pakistani government for example) believe was illegal is a better story than a murder. US policies and motives are already under attack from a variety of quarters. Nation states and non-state actors are all posed to strike at the US while a large junk of the world population is trying to make up its mind.

There was a book written in 2002 called “World Without Secrets” by Richard Hunter which stood for the proposition that in today’s world nothing can stay hidden for a long period of time especially if there are people with time and resources who want that information. This rule clearly holds true in major world events. Sooner or later ‘facts’ get out. At first the facts may be convoluted or incorrect, but ultimately other details seep out.

A core principle of PSYOP is that the truth needs to be the core of what we do. If Bissonnette’s facts are credible and discredit the White House, especially a couple of months prior to the election, learning this lesson will come at a steep price.

Posted by Lawrence Dietz at 2:06 PM No comments:

Can MISO put the Russkies in the Soup? 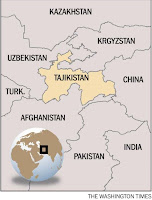 OK, so I’m reaching a little bit for this week’s posting. But give me a break, you can’t be a creative genius every week and I’ve spent the past several weeks in Idaho where I didn’t even get much of a chance to enjoy the country side.

Today’s posting was inspired by the Washington Times (not the Washington Post) article: “US and Russia in a new standoff” which appeared in the August 21, 2012 website at: http://www.washingtontimes.com/news/2012/aug/21/us-and-russia-in-a-new-standoff/. (Which is also the photo source)

The nub of the article is that Tajikistan is potentially a very strategic ally. That the Russians have had a strong military presence there which is slated to end in 2014. The year coincidentally that NATO would close its base in adjoining Krgrystan.

The article opines that while Russia is confident it can conclude a deal that would give them long term access, this is not necessarily the case. It appears that other countries such as India are also interested in employing Tajikistan as a military logistics point.

Suppose for the moment that DOD wanted to use Tajikistan very badly and that they were willing to offer military type assistance through increased mil to mil activities and by providing military equipment along with the training to the Tajik military.

The question I pose for the community is: should MISO be part of the mil to mil exchange so that the Tajiks could learn the fine points of Military Information Support Operations? I must confess that I really don’t know too much about the history of Tajikistan so that I can’t comment if they even consider non-kinetic operations as significant.

Having said that I would wager that if NATO offered some of the cyber expertise from their Estonian Center, this might be a very powerful incentive.
Thoughts?
Posted by Lawrence Dietz at 7:16 PM No comments:

USA Today.com had an article “As Syrian Rebels advance, intervention holds promise” (http://www.usatoday.com/news/world/story/2012-08-13/syria-rebels-us-intervention/57039798/1). The world has been watching events unfold in Syria and for the most part that is exactly what they have been doing - watching. Just as with Libya, the temptation to intervene on the side of ‘the people’ has been resisted by the world community.

According to the article while the President “has resisted calls for military intervention…” Secretary of State Clinton “said over the weekend that the U.S. is discussing several options, including establishing a no-fly zone, with Syria’s neighbor Turkey.” The no-fly zone tends to favor the rebels since the “Assad’s forces seem to have stepped up the use of helicopters and attack jets recently” the article states.

What does all this mean to the influence war? The first thing I did was take a look at the balance of urban versus rural. According to Nationmaster.com it’s a 50/50 split (http://www.nationmaster.com/country/sy-syria/peo-people). This would bode well for the use of traditional media and the Internet as the means of influence. If it were me, my approach would be a combination of mass messaging and targeted. First and foremost I would single out those who are on the fence and might be induced to defect or support the anti-government forces. Once they were identified I would do a social network analysis and determine linkages.

From a targeted perspective I would employ mobile phones as the delivery vehicle. Part of my strategy would also be to provide video and graphic content to a variety of sources that would show the government’s unconscionable acts and balance that with content showing successes of the rebels and support by the people.

Clearly the White House and the State Department are the driving forces at this point in time. The mere fact that Secretary Clinton is making public statements is a strong indication that other actions, often those behind the scenes activities which have become a hallmark of her management style, are also under way.

MISO at varying levels from no fly zone through ground engagement ought to be at least  templated, perhaps based on the Libyan scenario.

One of the interesting aspects of a career in MISO is that as Gilda Radner, the famous comedian once said, “there’s always something”.

Photo Source: By Khalil Hamra, AP
Syrian men inspect a hole allegedly made during an airstrike by government forces in the town of Marea, Syria, on Monday.

USA Today article referenced above.
Posted by Lawrence Dietz at 9:53 AM 3 comments:

PSYOP Training in the 21st Century

I’m up in Idaho for my annual summer rural reintegration training. As I pondered this Blot entry I recalled that it’s been quite a while since I went through the POOQ (PSYOP Officer Qualification Course).

Like most Reserve courses of the day, as I recall, it was a combination of correspondence and physical attendance. I also had the opportunity of attending the US Army War College Distance Learning program from which I graduated in 2002. Since 2009 I’ve been teaching on-line for American Military University.

I’ve noted some ‘issues’ between the AC and RC with respect to training and qualifications. My stated philosophy is that both AC and RC soldiers and officers need to be trained to the same standard and perhaps more importantly need to be able to work with each other quickly, under stress with mutual respect and trust.

The AC POOQ is taught in 6 phases and extends over 40 weeks long. The Reserve program involves about 4 weeks at Fort Bragg which overlap the last phase of the Military Information Support Operations (MISO) Core and the two week Cumulative Exercise (CULEX). Some NCOs are also involved in the CULEX as well.

In looking over the AC program at Bragg there are some obvious differences in addition to the time factor. PT is an ever present part of the training and there is of course M4 and M9 qualification. AC folks also get language training that RC personnel do not.

Another unknown for me is the scope and depth of the CORE subjects on both sides of the ledger. While I don’t think language training is an absolute requirement, I do believe that the use of interpreters needs to be a core subject mastered by all PSYOP Officers.

It occurred to me that the Resident Phase IV (MISO Core) could include some distance learning components to allow the AC and RC officers to cross fertilize the courses and broaden their mutual experiences.

I’m also wondering if there is a battery of tests and a  series of role play exercises that are administered at the end of the Core phase. In my mind there needs to be an assurance that all officers have the same baseline of achievement with respect to the Core materials.

I also noted that the AC Graduation Week has a Regimental Induction. I am hopeful that the RC is a part of that event so that all of the graduates recognize that they are a part of the same Regiment. It would be a pity to disperse a cohort that had spent two weeks together in a Culmination Exercise without completing the process of bonding and incorporation into a greater whole.