Doing is harder than thinking.

I’m delighted to get the opportunity of actually ‘doing’ MISO a couple of times a year for the past several years. I get to portray the IO Officer on a two star Admiral’s staff for an exercise. This means I’m the go to guy for all things PSYOP/MISO, EW and CNO.

While I certainly enjoy pontificating on the major high level problems of our day, being in the hot seat and having to develop FragOs, themes and messages while planning for, requesting and moving the MISO resources around requires a much more detailed perspective.

Many of the exercise players have had experience with MISO while others have none. So I have to be ready to answer questions and provide coaching and tutoring as needed.

This semi-annual deep dive gives me an appreciation for the kind of challenges MISO professionals face ever day, albeit in a rarefied atmosphere. Much of what we do requires creativity and cultural sensitivity related to those we are seeking to influence, while a good portion of our success is also related to personnel skills, military bearing and the ability to work with all ranks – both very senior and very junior to your own.

Once again, I am blessed to be a part of the Regiment.

Posted by Lawrence Dietz at 6:32 AM 2 comments: 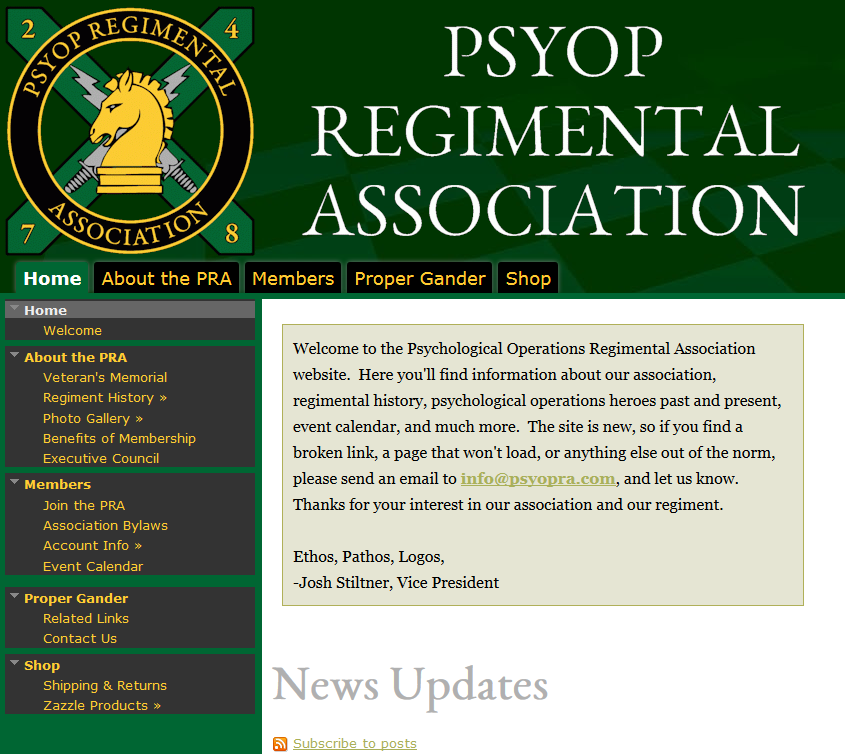 “We’ve come a long way baby.” Was the slogan of a cigarette company but it certainly applies to the PSYOP Regiment. The PRA has leap frogged itself as the Center of Gravity for the Regiment. They have taken advantage of their Fort Bragg location and some of the latest technology to offer significant benefits to our members.

While we are still served by the PSYOP Association and the PSYOP Veterans Association, the PRA has become a force for the regiment and our future.

If you are not a member, take a moment and check out their website at: http://www.psyopra.com/ which is also the photo source.
Posted by Lawrence Dietz at 4:40 PM No comments:

The article talks about how al Qaeda is addressed inside the beltway and in the real world.
The article, in my opinion, properly concludes that al Qaeda “has morphed from a discrete terrorist group into a wide-ranging fighting movement that conducts insurgencies, recruits foreign fighters into conflicts, raises funds, and conducts terrorism on the side -- almost certainly its least-resourced component.”

The enemy forces arrayed under the al Qaeda banner include those that are formally loyal to Zawahiri, as well as affiliates and allies and self-proclaimed followers. This broad band of people makes target analysis difficult.

One approach is to look at the target geographically with heavy densities of al Qaeda concentrated in Pakistan, Yemen, Iraq, Mali, Syria and Somalia. While this approach has some merit, it would exclude targets in potentially active AOs such as other countries of Africa and dormant cells in the US and UK.

Perhaps a better approach would be to look at the ‘who’ and the ‘why’ so as to be able to develop influence products to counter the AQ influence. This analysis must be multifaceted and include psychological, sociological and cultural aspects

Just as the targets occur across a broad swath, the influence products needs to counter them will include a broad range as well. Graffiti, posters, “tweets”, and chat room arguments  for example are needed along with more traditional TV, radio and print efforts.

Given the changes in demography, economics and sociology expected over the next decade, one could argue that the globally amorphous target will emerge as more of the norm than the exception.

Photo Source: http://www.foreignpolicy.com/articles/2014/01/31/they_who_must_not_be_named_al_qaeda_terrorism_list
Posted by Lawrence Dietz at 10:48 AM 1 comment: