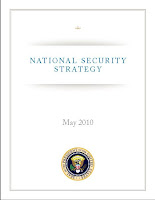 The last week in May 2010 is a particularly complex time. Headlines included the sending of 1,200 National Guard troops to the Mexican Border and continued angst over the alleged North Korean sinking of a South Korean Naval Vessel.

However, from a long term perspective, the quiet White House release of the 2010 National Security Strategy (NSS) of the United Stations. The NSS is the mother ship of security strategies from which all others such as the Defense Strategy, the Military Strategy, the Counter Terrorist Strategy, et al will be developed and with which they must conform. (See http://www.whitehouse.gov/sites/default/files/rss_viewer/national_security_strategy.pdf)

There were some key themes that will have a significant impact on PSYOP and PSYOP forces during Obama’s administration tenure and perhaps beyond.


1. Alliances and Partnerships
While the President reserved the right to act unilaterally when necessary, he made it very clear that it was intent to capitalize on old alliances and new partnerships. His goal of strengthening and modernizing old ones while building new and deeper partnerships is complemented by stated tasks of training and assisting security systems (and forces) in at-risk states.

These notions combined with increased military to military contacts will no doubt put pressure on PSYOP to operate more frequently in a combined (multi-national) environment and to provide training, advice and assistance to forces of other nations that the President deems are important to US interests, values and international order.

2. Holistic Governmental Actions
The President made it very clear that he wants the Executive branch t to develop integrated plans and approaches. This includes more aggressive diplomacy where diplomats complement military forces no matter where they are needed and the ability to harness experts who can strengthen governance and support human dignity (via development efforts).

The NSS also plans to employ economic and financial transactions as means to advancing US interests and promoting US values.
The bottom line here is a greater demand for Civil Affairs (CA) capability and a critical need for CA and PSYOP to work together seamlessly in a variety of environments.

3. Engagement Across the Spectrum of Conflict
The NSS points out other goals the cut across the spectrum of conflict:
- Disrupt, dismantle and defeat AQ and its violent extremist affiliates in AF, Pak.
- Pursue sustainable and responsible security systems in at risk stakes
- Prevent the emergence of conflict
- Counter violent extremism and insurgency
- Foster security and reconstruction in the aftermath of conflict
- Stop the spread of nuclear weapons and securing nuclear materials
- Resolve and prevent conflicts and heal their wounds.

PSYOP is a non-lethal battlefield multiplier. It is also a critical means by which the USG can communicate messages designed to catalyst behavior in conformance with the goals of the NSS. PSYOP is the means by which civilian populations are informed of CA activities and is a critical capability in gaining and holding information dominance which is a prerequisite success on the global state in the 21st Century.
Unfortunately the PSYOP community has not shown the ability to influence law makers and senior members of the Executive Branch of its importance. The need to influence has been overshadowed by the specter of cyber this and cyber that. While CA enjoys the benefits of a cadre of retired flag officers and a resourced association, PSYOP does not.

The ill timed split of PSYOP across two general officer commands (USSOCOM and USARC) needs to be unwound immediately and SWC needs to step up to the plate, as Regimental Home Base Commander and act as a catalyst to strengthen PSYOP’s clout inside the military and position a robust association to ‘educate’ the Executive and Legislative branches.
Posted by Lawrence Dietz at 4:15 PM 1 comment:

PSYOP and the New NATO Strategy

On May 17, 2010 NATO released the report of a panel of experts containing recommendations for a new strategic approach by the organization. (see http://www.nato.int/nato_static/assets/pdf/pdf_2010_05/20100517_100517_expertsreport.pdf)

I don’t suspect many of my loyal readers will peruse the document. For those of us who have served in NATO organizations, we recognize that there is a level of diplomacy among senior NATO civilians and commanders that requires a high degree of sensitivity and thus far has never called for much urgency.
In the following paragraphs I will provide a glimpse into the 58 page document.

Here’s the BLUF (Bottom Line UP Front)
PSYOP will be needed to deal with the spectrum of threats facing NATO. The US has the opportunity of being the lead dog by demonstrating our expertise and TTP (tactics, techniques and procedures). US PSYOP doctrine and TTP could be the standard for NATO if the USG is willing to make the commitment in terms of personnel and funding.

US training and doctrine could provide a jump start to the nascent ‘new’ NATO. Failure to engage will leave a vacuum that will either be filled by another nation or worse left unfilled resulting in disastrous consequences in NATO’s future conflicts.

The introduction to the 2010 Strategic Concept contains two key points in my opinion, the first of which is a new perspective on the NATO mission:
“Between now and 2020, it (NATO) will be tested by the emergence of new dangers, the many-sided demands of complex operations, and the challenge of organising itself efficiently in an era where rapid responses are vital, versatility critical, and resources tight. NATO” (Page 5)

The second stated point is that NATO has not done a very good job of building value in the minds of the citizens and politicians of NATO countries and notwithstanding its many accomplishments “could fail to retain the public backing and financial support it must have to perform critical tasks well.”

Strangely enough, at least to me, while there is ample mention of missiles and cyber threats, there is scant mention of the need to influence populations in areas where NATO forces find themselves. The strategy acknowledges that there are several factors “that magnify uncertainty”:

• The proliferation of nuclear and other weapons of mass destruction;
• The ambitions of international terrorist groups;
• The persistence of corrosive regional, national, ethnic, and religious rivalries;
• The world’s increased reliance on potentially vulnerable information systems;
• The competition for petroleum and other strategic resources (thereby highlighting the importance of maritime security);
• Demographic changes that could aggravate such global problems as poverty, hunger, illegal immigration, and pandemic disease; and
• The accumulating consequences of environmental degradation, including climate change.

Conclusions cited strikes by international terrorist groups and cyber assaults as key threats and point out that the organization must be able to make decisions rapidly and integrate help from countries and organizations outside NATO to deal with these complex threats. Partnership management was elevated to one of the 4 core NATO tasks highlighted by the 2010 Strategic Concept.

Neither PSYOP nor Information Operations were mentioned specifically. In fact nor was Strategic Communications. With regard to military missions, the document pointed out that military missions complement the core tasks and will include:
• Cooperate with partners and civilian institutions to protect the treaty area against a full range of unconventional security challenges.
• Deploy and sustain expeditionary capabilities for military operations beyond the treaty area when required to prevent an attack on the treaty area or to protect the legal rights and other vital interests of Alliance members.
• Help to shape a more stable and peaceful international security environment by enhancing partner interoperability, providing military and police training, coordinating military assistance, and cooperating with the governments of key countries.

Two other comments were worthy of note: NATO Special Operations should be elevated to a full component command and that “NATO should encourage the further evolution and coordination of national specialisation and niche capabilities”.

Civil Military Operations (CMO) came in for some special attention noting that these are key to complex operations and that civilian capabilities will have to be integrated into a range of operations especially where it is necessary to work with local authorities and combat forces for limited timeframes to provide security and needed public services.
Posted by Lawrence Dietz at 11:43 AM 2 comments:

As a brand new 2 LT I arrived at my first Platoon Command in Quan Loi, Republic of Viet Nam in May 1969. Our Army Security Agency (ASA) platoon was headquartered next to the Air Force detachment that ran the airfield. The NCOIC delighted in tormenting me with the luxuries he routinely provided his airmen. Getting anything from lobster to pizza was not a problem.

Since that day I continue to marvel at just how the Air Force is plainly superior in marketing. Whether getting funding or taking Cyber Space as their own, the Air Force just gets it. The latest bit of Air Force activity to catch my eye is the authorization of a Cyber Space Badge. (see http://www.af.mil/news/story.asp?id=123201885).

What does this all mean to me?
1. The Air Force has accepted Cyber Space as a key part of their mission.
2. The authorization of a badge means a main streaming of sorts and establishes credibility for a career field.
3. The multiple levels of badge and the ‘grandfathering’ provisions imply a continuity of career path.
4. The Air Force continues to have the inside track when it comes to mindshare of the public and Congress where Cyber Space is concerned.

The implication for PSYOP is pretty clear. Thus far we have paid lip service to the McClure award. SWC (the JFK Special Warfare Center and School, Fort Bragg, NC) is sitting on its collective butts in terms of authorizing the silver and bronze awards. The CG of SWC pays mere lip service to the PSYOP Branch. Perhaps when all the critical MOS billets are wearing blue a sense of urgency might appear.
Posted by Lawrence Dietz at 1:53 PM No comments:

The Psychology of Times Square 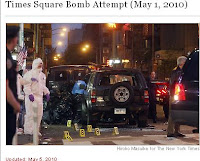 The vehicle borne improvised explosive device (VBIED) left in the smoking Nissan Pathfinder in Times Square on the evening of May 1, 2010 send a message even though the homemade bomb never went off. (Photo New York Times)


Times Square owns an indelible space in the psyche of America. It has been considered the crossroads of the world, the gateway to Broadway and one of America’s consummate gathering spots. Whether for the annual New Year’s dropping of the ball or celebrating the end of World War II, Times Square has been a focal point.

The brazen nature of the failed attack could be compared to the Doolittle Raid in World War II where US bombers were launched on a one way trip from the decks of aircraft carriers to strike at Tokyo as a way of showing the Japanese people that they were not invincible and that America could still attack. American has been relatively safe since 9/11 and our enemies would like to shock us once again.

The faceless, nation-less criminals behind the Times Square plot sent a message. While the intent of the message was to create bloodshed and tragedy in the heart of an American public gathering place the message received is that our enemy’s want to harm us and will stop at nothing to do so. They will not play by the rules of war and civilian targets, even purely soft ones are fair game.

The fact that a suspect was arrested in slightly more than 50 hours after the smoking van was spotted by a Viet Nam veteran street vendor was impressive. The fact that a terrorist on the watch list could get on a plane bound for Dubai was not.

What kind of psy-act could the US send in return? First of all who would be the target? Where are they? What kind of act would have such a dramatic effect so as to send the strong message? Sadly there is no easy answer. The shock of military action in Waziristan (the lawless area of Pakistan believed to be the hiding place of Osama Bin Ladin and others) has worn off. Only the unseen death caused by UAVs has seemingly had any effect.

Sometimes it’s hard to be the good guys and play by the rules even in PSYOP.
Posted by Lawrence Dietz at 6:00 PM 1 comment: