When Tactics Are Restrained – Resort to Grand Strategy 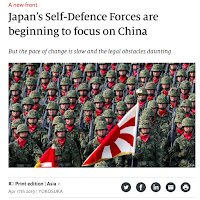 Japan’s Constitution was written after WWII in such a way as to comfort the victorious allies that Japan would no longer be an international military power. The Japanese Self-Defense Forces (SDF) have been slowly evolving into a force that can address threats abroad as well as threats to their Homeland.

Prime Minister Shinzo Abe has taken steps to broaden the rules of engagement for the SDF. The Economist of April 17, 2019 had an article: “A new front: Japan’s Self-Defence Forces are beginning to focus on China”. (see: https://econ.st/2Gvezbs which is also a photo source).

Among the ‘psyacts’ undertaken by the SDF is country’s largest warship, the Izumo (see: http://bit.ly/2KQws8Q, another photo source). The defcyclopedia.com article covering the vessel showed that the Chinese indeed were paying attention. “On 25 March 2015, the Japanese Maritime Self-Defense Force (JMSDF) commissioned the JS Izumo (DDH-183), lead ship of her class and the largest surface combatant of the JMSDF. Designated as a helicopter destroyer, the Izumo-class was built as an anti-submarine warfare (ASW) platform. With this new ship reinforcing the Japanese arsenal, the Chinese quickly considered the ship as a “war potential“, claiming that she was an “aircraft carrier in disguise“. The ship indeed bears a strong resemblance to an aircraft carrier, just like the previous Hyūga-class.

Other steps include the capabilities of their F-35 and dramatic increases in cyber warriors from 150 to 500 over the next five years according to the Economist.

Of course, the article also points out that according to one Western diplomat “Japan has not fired a shot in anger in seven decades”. From a PSYOP perspective, it’s pretty clear that the Chinese are sitting up and taking notice whether or not Japan’s newly invigorated SDF ever fires a shot or takes a casualty. After all, isn’t that why PSYOP is all about?
Posted by Lawrence Dietz at 10:50 AM No comments:

The Operation Comes Before Support 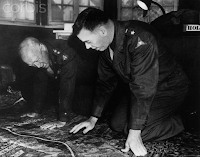 OK, I’ve been off line for a while, but in my defense, I have been pretty busy. My presentation on Cyber Influence at the RSA Conference (rsaconference.com) was well attended. Given that most of the attendees were cyber geeks, I was a bit surprised when two bearded gentlemen approached me afterwards and told me they were in the Air Force and they enjoyed my talk. Sure, Air Force, like I’m in the Bolshoi Ballet.


After a week of catching up I was off for a 2-week exercise at a DOD School that trains special staff officers. For the past decade I have been pleased to serve in a CPX as the IO SME/J39 on a replicative staff of a MG. The goal of the CPX is to give new staff officers and senior NCOs the experience of working on a General Staff. Where, while they will get private time with the boss, they have to work with and through a staff most of whom out rank them by several grades.

The staff, like any other mini-civilization has its own rules. Some of these rules are written somewhere, while others are not – you simply learn them by doing. Far better to learn at the school house then in the midst of a conflict.

The exercise replicates a deployment of an Army Brigade Combat Team (BCT), a Navy Carrier Strike Group and a Marine Expeditionary Unit (MEU).

The scenario builds from a cascade of news items through mounting tension and problems leading up to a Presidential order to deploy and an ensuing operation to support a friendly government. The exercise is 6 days long.

Experience has shown that this type of immersive learning experience is difficult for many students to absorb, so the faculty decided to split into a 3-day planning phase and a 3-day execution phase.

Naturally, the prelude to the execution is an Operations Order (OpOrd). The boss receives an OpOrd briefing approaching 100 slides.

Key to success for all of us supporting the CDR is that we have to understand that Op Order, who the players are, where they are moving or supposed to move, who are the bad guys, what are the potential problems and obstacles, etc. All of this is a prerequisite to being able to formulate individual function/specialty plans to support it.

The students also need to understand that no matter how many stars the military CDR has, they are not the senior executive in country – that is the Ambassador or chargé d'affaires who is the President’s direct representative.

The influence operations team needs to recognize how and where to learn about the environment on the ground from a media and communications perspective. Here again, experience appears to be the best teacher.

As the MISO/PSYOP advocate and lead disciple I have to also be able to express how all the IO elements reinforce each other and the importance of information synergy versus information fratricide.

Students with little or no exposure to MISO/PSYOP often have some very false preconceived notions that are adjusted based on their experience with IO working groups, Joint Planning Groups, Joint Targeting Groups and other aspects of the exercise.

Needless to say – understanding the operation is at the core of all this and cannot be taken for granted.
Posted by Lawrence Dietz at 3:06 PM No comments: