Radio is More Important Than You Think!

On September 7, 2019 I sat in a window less room – no, it wasn’t a SCIF. It was the Radio Room for my local Red Cross Chapter. For the first time ever, the region was conducting a test to see which chapter could communicate with other chapters.

This experience helped my belief that radio is often overlooked and that while Social Media may dominate mindshare, there are other ways to communicate and influence. Radio has served three major roles.

1.     Radios in Emergencies
While the above noted test was in the planning stages for a while, I could help but think of the timing of this test with two other interesting radio developments. The first was the importance of Ham Radio in communications and supporting relief efforts associated with Hurricane Dorian hitting the Bahamas (see: http://bit.ly/2kqzKmT). Ham Radio has long been an important communications resource during emergencies. For background you can check out the Domprep Journal article “Ham Radio in Emergency”

2.     Radios as a Secret Message Medium

The British Broadcasting Corporation (BBC) was very active in WWII broadcasting and information and as revealed in article on 3 September 2019, they also had an important role in transmitting instructions via ‘personal messages. (See: https://www.bbc.com/news/entertainment-arts-49562570, which is also a photo source). This particular article details how the BBC used music and coded messages to transmit instructions across Europe from Poland to France. For example, the article noted that “On the night of 5 June 1944, the eve of D-Day, the phrase "Berce mon coeur d'une langueur monotone" or "cradle my heart with a monotonous languor" signaled the invasion was about to begin.”

On September 7, 2019 the NY Times also ran an article: Radio Free Europe (RFE) Is Set to Be Revived in Hungary (see: https://nyti.ms/2kzqLzG which is also a photo source). This article actually focuses on the US Agency for Global Media.

While the Agency is independent and not subject to political influence. Here’s a look at them in their own words:
·      The mission of United States Agency for Global Media (USAGM) is to inform, engage, and connect people around the world in support of freedom and democracy.
·      The Agency’s mission is reinforced by those of the individual broadcasters that are overseen by USAGM. 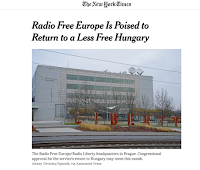 ·      USAGM networks are news leaders, uncovering stories left untold in environments that lack press freedom. Major media often pick up or cite our networks’ news coverage. We serve 345 million in 100 countries and 60 languages every week.
·      Radio Free Europe/Radio Liberty’s mission is to promote democratic values and institutions by reporting the news in countries where a free press is banned by the government or not fully established. Our journalists provide what many people cannot get locally: uncensored news, responsible discussion, and open debate.
·      Radio Free Europe/Radio Liberty (RFE/RL) is a private, nonprofit, multimedia broadcasting corporation that serves as a surrogate media source in 26 languages and in 23 countries, including Afghanistan, Iran, Pakistan, Russia, and Ukraine. (see: https://www.usagm.gov/networks/rferl/, another photo source)

While Social Media continues to dominate people’s thoughts, let’s not forget that there are other means of influence that should not be overlooked or taken for granted.


Posted by Lawrence Dietz at 1:18 PM No comments: