The situation in South Sudan was dire enough to call for the deployment of a 150 Marine quick reaction force from Spain. (See: http://www.csmonitor.com/World/Security-Watch/2013/1224/US-rescue-operation-in-S.-Sudan-to-test-post-Benghazi-Marine-reaction-force - which is also the photo source).

At the moment (1715 Pacific Time on 26 December 2013), the mission is billed as a NEO + security mission. The Marines are charged with protecting the American and other citizens as well as the American Embassy. They are also tasked with providing security to any non-combatant evacuation operation (NEO).

Unlike the similar scenarios I’ve worked on for exercises, this one promises not to be a totally permissive environment with a clear potential for combat operations.

Today’s post is more of a question than a posting – what sort of MISO support should this task force have? Is Marine MISO robust enough to insure that the task force can be a pure play Marine operation? If not, will the Army have to deploy MISO support and if so – has the mechanism for the assessment and subsequent manning been sufficiently developed and tested?

I don’t have an answer and am hoping that one of my readers can help out.

Other complications such as allied nations, the UN and perhaps even a security force composed of forces from several African States will muddy the operational waters. However, I believe it is fair to say that this kind of incident certainly typifies more of the ‘rule’ in the 21st Century than the exception.

This will be my last posting for 2013, may you all be blessed with a healthy, happy and rewarding 2014.
Posted by Lawrence Dietz at 5:27 PM 3 comments: 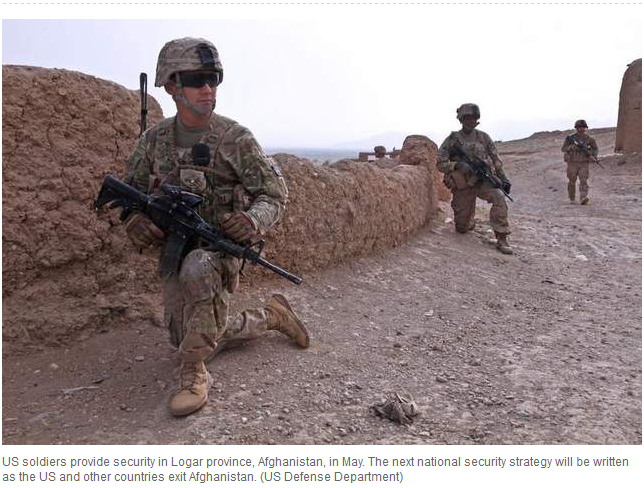 According to the Defense News (see: http://www.defensenews.com/article/20131211/DEFREG02/312110022/Next-US-Strategy-Carries-Heavy-Expectations, which is also the photo source), the Presidents 2014 National Defense Strategy includes: “a push for nuclear disarmament, a rebalance of diplomatic and military attention to the Asia-Pacific region, helping build economic stability in emerging regions, and a continuing focus on the global counterterrorism mission.”

Relevance is a key to resources in the government world. I propose that MISO forces be employed in support of selected US efforts to build economic stability.

We have discussed the relationship between MISO and Marketing. The conclusion is generally that MISO is more than marketing per se and requires a number of other skills to include military prowess and an overriding job of supporting the CDR’s mission. So that marketing guys are not necessarily good MISO practioners.

We haven’t really given much attention to the opposite – that is are MISO personnel adept enough at marketing to train others in marketing and help them in their marketing efforts? I believe the answer is a resounding yes. While I was in Bosnia I worked with the Embassy’s lead on economic development. It was clear to me that basic marketing skills – understanding the nature of how people are influenced, the local media environment and the nature of a global economy are general skills that most MISO organizations possess to one extent or another.

It seems to me that if SWC expanded the MISO curriculum to include a basic set of marketing classes and a lab on business planning, MISO soldiers would be an excellent resource to complement other economic development organizations. MISO could conceptually function as outside marketing consultants to advise local businesses on the nature of the media environment and work with them to develop basic marketing materials.

While some may argue that this would detract from the military mission and capabilities, it’s clear to me that if the Commander-in-Chief says the mission is a key piece of his military strategy – then marketing support to economic development is indeed a military mission.
Posted by Lawrence Dietz at 2:40 PM 4 comments:

You Show Me Yours, and I’ll Keep Mine A Secret

Foreign Policy Magazine of 3 December 13 featured an article “Army Investigates Itself” about the visit of Maj. Gen. Chen Dongdeng, the PLA's director of military engagement to the US Army Combined Arms Center (CAC)  at Fort Leavenworth. (See this link which is also the photo source http://complex.foreignpolicy.com/posts/2013/12/03/army_investigates_china_spy_incident_that_involves_no_secrets#sthash.kWqvpMx4.mmUZiqRJ.dpuf). The US Officer in the photo is LTG David G. Perkins, the Commander of the US Army Combined Arms Center.

The US Army routinely engages with other military organizations around the world. These military to military engagements, “mil to mil” in defense parlance are part of doing business. Of course, the nature of the exchanges, the content of the conversations and the materials viewed, exchanged or even talked about vary depending on the nation, timing, and the individuals.

From a personal perspective, I found my time at SFOR HQ in Sarajevo as one of the highlights of my military career because of the opportunity of working with NATO officers from all over the alliance. I gained appreciation for their nation’s military and gained a profound understanding of the common bond among most military personnel. Consequently, I view mil to mil exchanges as generally good thing.

Concern was raised in the Leavenworth matter because of “the aggressive way” that the Chinese were asking for copies of military manuals. While (according to the article) the manuals in question were unclassified and available to the public, the incident caused the Army to re-think about its administrative management of this particular mil to mil exchange and perhaps others.

An obvious question is: “if the manuals are unclassified and available – what’s the big deal?”. Certainly handing over the manuals would save the guests the time and bother of finding them, but there’s more to the story.

In my experience, those whose native language doesn’t use the standard alphabet need more time to translate English into say Arabic, Chinese, Korean or Russian. Also I have found that Asians in particular would much rather study a diagram to determine the nature of the subject matter and the nuances behind it than read volumes or consume PowerPoints. Consequently, providing a manual would be a significant time saver and foster learning.

Manuals of course are only part of the story. The key is often the Tactics, Techniques and Procedures (TTP) that take the doctrine and put it into practice. Knowing the manual may actually be a handicap if the practitioner on the ground tends to ‘wing it’ as is often the case. For example in Bosnia US 1st Infantry Division CDR, MG David Grange was his own PSYOP Officer who created and distributed “PSYOP” materials as he saw fit.

Of course, these requests work two ways. By knowing which manuals were requested, the CAC should be more aware of Chinese interests and should be able to share the knowledge throughout the allied military establishment.

I suspect that MISO and IO were high on the request list, but of course that information isn’t mentioned.

In thinking about mil to mil exchanges, it would appear that the sponsor of the foreign military needed to have a work plan that would state the purpose of the exchange, the benefits to the US military, the subjects to be discussed, materials to be exchanged and of course a security risk analysis. The risk analysis being the most important ingredients in the mix and perhaps the first step in the approval process.

In the case of MISO, I’m not convinced that such an exchange with the PLA is a good idea.
Posted by Lawrence Dietz at 1:00 PM No comments: