Yemen: The Next Afghanistan? 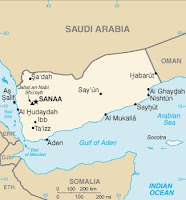 I was thinking of giving the Blog two weeks off. After all, it’s Xmas Eve when the pace of government and business slows to almost a halt in the week between Christmas and New Year’s. Well – that was my plan until I came across an article in the December 24, 2009 Arizona Sun: “Airstrike illustrates ballooning US involvement in Yemen” (http://www.azstarnet.com/news/322562)
Map Source: University of Missouri – St. Louis: http://www.umsl.edu/services/govdocs/wofact2007/maps/ym-map.gif
The article talks about increased US military activity in Yemen to bolster the effort of the Yemeni government against Al Qaeda. Yemen is nestled to the south of Saudi Arabia and across the Gulf of Aden from Somalia and Djibouti. Little bells should be going off in your head about the volatility of this situation and the particularly interesting nuances in dealing with the neighbors.
First of all whenever there are ‘drones’ there are ‘accidents’ and civilian casualties or at least the allegation of them cannot be far behind. Failure to deal with the backlash will result in negative opinions of the US and the Yemeni government and a decrement of US status in world opinion in general.
In today’s world there are few secrets, US military involvement is not one of them. This is clearly a case where PSYOP needs to be involved. Drones and military action means PSYOP plans, programs and materials need to be in play BEFORE the eventual accident or allegation.
This particular part of the world has gotten it share of notoriety from US involvement in Somalia, pirate activity and even an episode of the adult cartoon series, South Park. The economic clout of Saudi Arabia and their deep connections to Al Qaeda are well known; consequently US actions in this area cannot be successfully accomplished without some type of coordination with the Saudi’s.
Rounding out the mix is Djibouti which has long been under the influence of the French and is considered a strategic bulwark in the area. Actions which poison a potential ally in the region must be considered with caution and long range strategy in mind.
So we find ourselves coming in to the movie theater in the middle of the feature. This playing feature is “US in Yemen” although it seems strangely like the movie we just saw: “US in Afghanistan” and we didn’t much care for that one.
My best wishes to my brothers and sisters in the PSYOP Community and a special thank you to those of you who are serving in harm’s way at this time of year. May 2010 be a breakthrough year that sees a trend to calmness in the world and a reduction in PSYOP Optempo.
Look for the next PSYOP Regimental Blog entry after the 4th of January 2010.
Posted by Lawrence Dietz at 8:51 AM No comments:

Palestinian Polarity: Implications for Afghanistan and Beyond

The article describes how two men grew up in the same refugee camp in Gaza. One ended up moving to the West Bank while the other remained in Gaza. The article goes on to describe how the man in the West Bank was able to begin a business and how his son will be going to college in Cyprus to study film making while the other’s son is studying in al-Quds University and has no idea as to his future.
It would seem that the purpose of the article was to show how these two men and their children were affected by the move and to highlight the growing dichotomy between the two Palestinian factions and areas.
To me there are some interesting lessons to be learned here. First of all, age old conflicts can take generations before there is even the slightest amount of movement towards resolution. Secondly, the soundest way to strengthen a society is from the bottom up starting with the family unit. The basis of the strength comes from insuring the basics of being able to live a life where there is security and stability, but more importantly, where there are bright possibilities in the future.
The ability for the children of the original Gaza refugees to seek out and obtain education beyond their own country where they are able to learn skills and nurture their talents to benefit their people is a key differentiator. Where squalor and hopelessness prevail, there is an incentive to lash out against real or perceived oppressors.
The parallel to Afghanistan is clear. The Taliban have succeeded in permeating the society and supplanting the government. They have done this on a village by village basis and they have done so over many years.
The ‘new’ US strategy is aimed at dislodging the Taliban because the Taliban provide safe haven to Al Qaeda and our other enemies. Given the number of villages and the time and treasure needed to establish their security and stability – I’m not optimistic.
In the meanwhile it will be up to the tactical PSYOP soldier, buttressed by efforts of local, regional and high level PAOs to constantly paint the positive picture envisioned under a non-Taliban (but not necessarily purely democratic) government. PSYOP and its allied disciplines must constantly strive to publicize ‘good examples’.
PSYOP will also have to be ever watchful for inevitable screw up where injuries or deaths to the civilian population are attributed to the International Security Assistance Force, (ISAF) so as to minimize the negative impact of these incidents and enemy propaganda. Neither of these are easy tasks nor will they be made easier by the surge. President Obama and his key leaders need to be ready to re-evaluate their ‘new’ approach early in the game and often to properly respond as the situation evolves.
Photo source: http://images.google.com/imgres?imgurl=http://cabalamuse.files.wordpress.com/2009/01/palestinian_kids_are_seen_sized.jpg&imgrefurl=http://www.palestinecenterblog.org/2009/10/brief-palestinians-must-be-afforded.html&usg=__oNLFK4XB33iphJHq40vB4mEpsgE=&h=436&w=640&sz=79&hl=en&start=6&tbnid=QaOk5wAM-BwcVM:&tbnh=93&tbnw=137&prev=/images%3Fq%3D2009%2Bpalestine%26gbv%3D2%26hl%3Den
Posted by Lawrence Dietz at 1:21 PM No comments:

The Reality of an Influence Strategy in Afghanistan 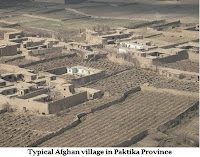 The more I read about the situation in Afghanistan, the more I stand by my previous analysis of the bottoms up rural nature of the country. The Armed Forces Communications and Electronics Association (AFCEA) the ‘trade association’ for the Signal Corps and IT in general has an electronic newsletter called NightWatch. Their December 8 edition had a particularly good analysis of Afghanistan which I commend to your reading at: http://nightwatch.afcea.org/NightWatch_20091208.htm

“Winning” in Afghanistan needs to be defined as establishing a secure enough environment that the country would no longer be a safe haven for Al Qaeda and other enemies of the United States. Our goal is not and should not be for Afghanistan to become a modern, democratic state. That being said, the key mission is to bolster local governments at the village level to the point that the Taliban are no longer to establish their dominance nor are Al Qaeda or other foreign enemies be able to exploit the country or its people.

We must recognize that a Taliban lead insurgency is a chronic condition much like a disease. However, the major of Taliban are not militants and are probably not ‘anti-American’ by nature as much as they are anti- stranger and anti-occupier. Consequently there are a number of key messages that must be transmitted:

2. The Taliban Way is Not the Afghani Way
This would reassert the need for a people oriented justice system rather than the Sharia law or law based on the Quran. History has shown that the people of Afghanistan are fiercely independent and have no taste for these draconian legal systems.

3. NATO and the US are Not Occupiers
The ISAF (International Security Assistance Force) is there to help the people of Afghanistan restore security and peace. The mission of ISAF is to train Afghani’s to handle their own security and law enforcement and will leave once the mission is accomplished.

These messages need to be transmitted at the local level more than any other. This will require the entire force to be cognizant of how to work with the local villages and require the Department of State to cajole or catalyze the Karzai government into the same mode. It is clearer than ever before that the only way to succeed in Afghanistan is from the Bottom Up. As a former precinct organizer, let’s hope that President Obama insures that this philosophy is core to our strategy and operations.

Posted by Lawrence Dietz at 11:17 AM No comments:

State of the Regiment: Strained But Improving

As we approach the end of 2009 and having just attended a “Council of Colonels”, I felt it was appropriate to provide an update on the State of the Regiment. Overall 2009 was a very positive year. Most Importantly PSYOP soldiers continue to excel globally and the ‘dwell time’ (time between deployments) for Reserve PSYOP soldiers remains around 20 months – less time at home than the active counterparts tend to enjoy. Soldiers and their families are stepping up to the challenge and enduring this unprecedented level of sacrifice.

We were able to recognize exceptional long standing PSYOP contributors with the first annual award of the McClure Gold Award for PSYOP Excellence. Regimental week, hosted by the 4th POG at Fort Bragg, was a success and a rewarding experience for all who attended.
The Regiment continues to feel the detrimental effects of splitting active and reserve PSYOP forces between the US Army Reserve Command and the US Army Special Operations Command. This bifurcation resulted in degraded cohesion across the force and has had a negative impact on training and standards.

The Regiment continues to be well served by two associations (POA and POVA), each of which has its own stated core goals. However, neither of them has risen to the needed critical mass of other associations such as MI, Artillery, SF or CA. Consequently, the Regiment does not have a strong, financially viable, unofficial voice that can also serve as a catalyst to grow the Regiment and increase esprit de corps. Among other things, a strong association is needed to:
• Recognize the entry into the Regiment of newly qualified soldiers and officers.
• Record and maintain legacy of PSYOP
• Engage in training process to provide a historical perspective
• Represent the interests of PSYOP internally within DOD and externally
• Enhance Morale

Positive steps are being taken to champion the Regiment and move it forward. In past years informal coordination was facilitated with a “Council of Colonels” who met at least annually at the “Worldwide PSYOP Conference” and other venues. I am pleased to report that this cross organizational body has been reconvened and is making plans to foster cross-organizational cooperation and strengthen the Regiment and its activities.

It is hoped that SWC will step up to its responsibilities as the “Regimental Home Base” and afford the same professional courtesies to the PSYOP Regiment that it has continually provided to the SF Regiment.

Regimental Week is again tentatively scheduled for the week of June 7, 2010 at Fort Bragg. The PSYOP Troop Commanders have all committed to participate in next year’s event to make it truly a Regimental function. In addition a strong commitment was voiced to approve criteria for the Silver and Bronze McClure Awards and to secure funding so that proper recognition made be given to outstanding PSYOP personnel.

As we look forward to 2010, I am optimistic that the Regiment will grow and mature to support our marvelous PSYOP force that continues to excel in spite of hardship and sacrifice.