Communicating in An Urban Disaster

When I was in marketing in High Tech, there was always a great fear of tarnishing the brand. Actions that made our company look bad and causing our potential customers not to buy our products and services.

President Trump has taken three actions that are tarnishing the American brand and making our job even harder.

“Travel Ban”
The first is the ‘Travel Ban’. While the administration maintains it is necessary for national security, the impression is that it is anti-Muslim, a clear move away from America’s tolerance principles and a step towards fascism. One article on that topic is from Brookings. (See: https://www.brookings.edu/blog/markaz/2017/02/01/first-they-came-for-the-iranians/?utm_campaign=Brookings+Brief&utm_source=hs_email&utm_medium=email&utm_content=41813767, which is also the photo source)

Building a wall on the Mexican border is not an effective way to stem the tide of illegal drugs and immigration from that great nation. Even the President’s own Homeland Security Secretary believes it won’t work (see: https://www.nytimes.com/2017/01/25/us/politics/homeland-security-john-kelly-border-wall.html?_r=0); also a photo source) 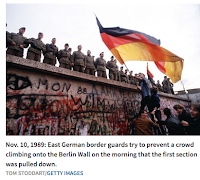 The Russians tried a wall in Berlin and we know how that worked out
(See: http://history.howstuffworks.com/historical-events/berlin-wall.htm; and their picture at right).

Selling the “American Brand” or convincing people around the world that democracy and constitutional freedoms are the best sort of government is hard enough. When you tell some ‘you are not welcome’, you are not only denigrating the ideals, but also saying “I hate you!”.

While the administration maintains the travel ban is not a ban against Muslims, the world thinks differently, resulting in great danger for people who have helped us in Iraq and Afghanistan. I’m talking about interpreters in particular. These native citizens literally put their lives on the line to support US and Coalition troops. By invoking such a draconian move, we are turning our backs on the very people responsible for our success.

Torture
The third way President Trump is making our job harder is by espousing the believe that torture is actually a productive intelligence technique. (See: http://www.factcheck.org/2017/01/trump-on-torture-again/)

It appears that I am in good company. Even James “Mad Dog” Mattis, Secretary of Defense opposes the ban. (see: http://thehill.com/policy/defense/316356-mattis-remains-opposed-to-torture-pentagon-says; which is another photo source)

I’ve been an analyst of one kind or another – intelligence, market research or legal analyst for most of my adult life, which has been a pretty long time so far. I’ve also taken more than a couple of sales training courses. I am firmly convinced that torture is not an effective interrogation technique.

Even if that repulsive method was helpful, the amount of information gained would in no way come close to the harm in terms of how many new terrorists have been recruited.

I know that the President believes in what he is doing, and strangely enough for a politician, actually following through with campaign promises. I just wish he would have looked at the bigger picture before acting.
Posted by Lawrence Dietz at 9:32 AM 2 comments: