The April 25, 2011 Washington Post Slams DOD for “influencing media in a foreign country – particularly those where U.S. troops have fought – is not very good, and recent attempts by US military units have been even worse” (http://www.washingtonpost.com/world/for-us-managing-foreign-media-is-a-no-win-proposition/2011/04/23/AFhTRlkE_story.html) Also the photo source.

Walter Pincus essentially feels DOD is wasting tax paper money with extensive contractor and military efforts to impact foreign media especially in areas where the US has extensive combat forces He blasts activities in Iraq and quotes a source (a writer from the New Yorker) describing how US efforts have established Afghanistani media moguls (Saad Mohseni, chairman of the Moby Group and his brothers).

According to the New Yorker source (Kenneth Auletta) a USAID (State Department Agency) grant jump started their business which has blossomed to produce a variety of “reality” TV programs. Auletta wrote that the programming has a more profound impact on the Afghan people then would a newscast.

Much of this is of course déjà doo – doo meaning I’ve seen this sh*t before. First of all TV is entertainment even the news is entertainment. Most TV, reality shows in particular are not intended to appeal to the Harvard Business School (or Yale as in the case of Mr. Pincus) crowd. In some countries TV is among the few escape vehicles that the people have. For example in Bosnia during my 1997-98 tour there Venezuelan soap operas were among the most popular shows.

I guess I didn’t get what problem Mr. Pincus was trying to highlight. There are certainly quite a few: contractors and media enterprises require heavy funding that could perhaps be used elsewhere; citizens are naturally pre-disposed to regard foreign troops on their soil as a bad thing; should governments have the power to influence media in the first place?

All of those seem to be profound topics worthy of discussion, but to me, throwing the military under the bus in a couple of dismissive sentences is shoddy journalism. Did Mr. Pincus mean ISAF? Did he mean DOD or did he mean the actions of PSYOP/MISO teams on the ground in Iraq or Afghanistan. Perhaps he was actually criticizing President Obama for the lack of an overarching information engagement strategy. No matter, the opinion piece falls short on several counts.

Unfortunately PSYOP lacks the clout to counter this rhetoric as it bounces around Capitol Hill. Our challenge is to insure that the accomplishments of our PSYOP forces receives at least as much ink as their alleged failures.

The US “strategy” in Libya can best be termed bizarre. The Obama White House dawdled at the prospect of military support to the rebels (perhaps with good reason since nobody really seems to know who they are), then committed US air power before bowing out of the lead and now plans on engaging Unmanned Aerial Vehicles (UAV) (see http://www.dw-world.de/dw/article/0,,15024270,00.html which is also the photo source).

This kind of wishy washy approach plays havoc with PSYOP/MISO. A core PSYOP principle is that effective PSYOP is based on truth. This leads to the parenting principle about threats and punishment. Don’t threaten a punishment unless you can and are willing to carry it out. As the Obama administration tries to convince the world, itself and the American public that Iraq is over and Afghanistan is turning the corner, they now need to justify another Billion or two in the face of one of the worst budget crises in our history.

Should the President decided to commit ground troops (which is not very prudent in my opinion at this point), Senator McCain notwithstanding), will AFRICOM have the resources to orchestrate a credible influence campaign? Where will the MISO troops come from and how long can they support the operation? Is the country prepared for another min-Iraq or worse yet a hybrid of Afghanistan and Somalia should the Qadaffi government crumble?

We are always accused of being ready to fight the last war. Libya appears to be the next one, and perhaps the model for one or two thereafter – let’s consider all the effects and be ready ahead of time for just once!

Posted by Lawrence Dietz at 7:37 AM No comments:

Put Down The Loudspeaker And Pick Up The Cell Phone

Today’s crazy optempo doesn’t allow a moment to think much about the future. The April 9th, 2011, Economist featured an article: “Mobile telecoms in Africa” – Digital Revolution. (See http://www.economist.com/node/18529875?story_id=18529875) which is also the photo source.

I’ve mentioned the need to be on the look out for future locations where PSYOP/MISO missions will be played out and I’ve also pointed out that Africa is an area where scant attention has been paid – Libya and the Middle East countries are an exception of course. The article noted the implementation of 3 submarine cables to Africa and a corresponding price reduction of 90%.

At the moment basic handsets dominate with Nokia the dominate player. Other product notes include that a $90 Android operating system smartphone made by China’s Huawei “sold out in several African countries in less than a month”.

There are strategic and tactical aspects for PSYOP to consider. On the one hand it would be nice to get on the inside track of the mobile provider and be able to easily send mass messages of all types: voice, SMS, Twitter, etc. On the other there is a need to send targeted messages to selected devices.

Most likely the mobile phone campaign would be supplementing other effort, yet total reliance on a single device as may be the case with some targets makes dominating that communications medium critical. This leads to a couple of questions: what organizational level should have the capability to employ the mobile media of today and the more complex devices of tomorrow and what equipment and support will be needed?

At this point I don’t have any particular answers, but I thought it was important to raise the question and reference the article.

Posted by Lawrence Dietz at 10:28 AM No comments:

The article talked about the Ministry of Defense Advisors (MoDA) wherein DOD Civilians at the GS-13 level commit to a year of service in Afghanistan. Anecdotal evidence in the article shows that civilian advisors are purported more flexible and credible than are untrained military personnel in the same slots.

It is implied that there is an easier bond between civilians and the ministry workers.

Could the same thing be true in the world of Military Information Support Operations (PSYOP) and strategic communications? Civilian contractors augment military forces almost everywhere – isn’t this the same thing?

Unlike some other aspects of the military, the influence world (PSYOP, Public Affairs) has counterpart civilian careers. Civilians, like my former colleagues in Symantec’s consumer and enterprise marketing departments bring different talents and people skills into the equation than do former military personnel.

In Bosnia I found my ability to relate as a civilian to TV station personnel in particular was a strength because my civilian persona was far more akin to their perspective than yet another guy in uniform. There was also the ‘age thing’. A fair number of senior operating personnel at the station were over 50 placing an age barrier in place with junior officers and NCOs.

Perhaps the Department of State should offer a similar program to place marketing, sales and public relations officials in overseas slots – even if just at embassies to further the cross pollination and offer countries the option of civilian support as a supplement to their nation and skill building activities.

Posted by Lawrence Dietz at 7:53 AM No comments:

New References on NATO and Libya

U.S. Rebuffs Appeals For More Forces For Libya Mission
(Washington Post)...William Wan and Leila Fadel
At a summit of NATO nations that opened here Thursday, U.S. officials played down emerging rifts among allies and rebuffed calls from within NATO for its members to commit more forces to the military operation in Libya.

NATO Showing Strain Over Approach To Libya
(New York Times)...Steven Lee Myers and Judy Dempsey
Only 14 of the alliance's 28 members are actively participating in the operation — joined by other nations like Qatar, the United Arab Emirates and Sweden — and only 6 of those are striking targets on the ground in Libya. That has prompted France and Britain in particular to call for an intensification of the war effort by more allies.

NATO PSYOP: A camel is a horse designed by a committee. 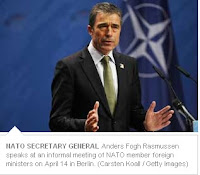 Common sense dictates that America should never go to war, or anything resembling war alone. The recent action in Libya is a case in point. President Obama held off committing US resources until there was some sort of ‘international push’ and ultimately took the position that the US would not be the lead – perhaps for the first time.

Of course the President came in for criticism from both sides of the aisle for acting or not acting and theorectically the French are ‘in charge’. However, is this a NATO kumbaya moment? Not really. Here are a couple of today’s headlines:

I find these headlines troubling, but not surprising. Having served at a 4* NATO Task Force HQ where there were more Generals than Lieutenants, I’m familiar with the darker side of the Alliance – national politics and personalities.

The President was, in my humble opinion, on the money when he made sure that the US would not be the lead, however, this may turn out to be more wishful thinking than practicality. The Libya mission is at the moment at least, a relatively straight forward kinetic operation. Military targets are identified, aircraft and missiles are launched.

Given this simplicity and the need to control airspace, not to mention control fires to avoid fratricide, the Alliance, at least in theory, should be able to enlist and coordinate efforts of its members. This apparently does not seem to be the case as evidenced in the headlines.

My previous posts showed that I believe our enemies will exploit these attacks in propaganda against us, especially in the Muslim world. This effort continues unabated. While I’m not involved in any active operations, I would be quite surprised if there is even a dedicated and streamlined US information engagement effort touching SOCOM, EUCOM and AFRICOM while integrating active and reserve PSYOP forces to implement a comprehensive information engagement strategy including traditional PSYOP and CNO for its own sake and for psychological effect.

National needs and priorities are always at work inside the Alliance. Often the friction among these often conflicting priorities is exacerbated by senior officers who put national needs (after all their national GOs write the OERs) ahead of the good of the alliance.

Of course, I’m also not sure that the Alliance has an adequate capability to develop an overarching information engagement strategy, never mind implement the operations to support it.

I welcome input from those of you out there who can set me straight.
Posted by Lawrence Dietz at 6:12 PM No comments: