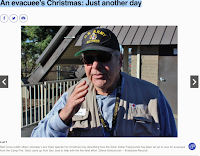 Doctrinally  PSYOP/MISO forces are authorized to provide support to Civil Authorities in time of emergency. The doctrine is found in Joint Publication 3-28 Defense Support of Civil Authorities 29 October 2018 (http://bit.ly/2XXM8Jz) Chapter V, Section 6 Public Affairs c. CAIS (on page V-11)“Psychological operations (PSYOP) forces can be employed domestically for CAIS under direction and authority of a designated lead federal agency (LFA) or civil authority. When executing CAIS activities, PSYOP forces are restricted by policy and SecDef guidance to only broadcasting and disseminating public information. When authorized for employment in this manner, PSYOP forces utilize their media development, production, and dissemination capabilities to deliver public or other critical information during domestic emergencies. Their mission is strictly to inform, and all CAIS efforts should be coordinated with ongoing military and LFA PA efforts. The LFA is the approval authority for all products conveying the lead agency messages.” (Reference: Chapter V V-12 JP 3-28)

Thus far, PSYOP forces have had only limited experience in these matters. For a look at how support was rendered after Hurricane Andrew, here’s the link to SGM (R) Friedman’s story: http://www.psywarrior.com/PSYOPHurricaneAndrew.html.

My perspective on the issue comes from my position working for a NGO. During the past few years I have had the opportunity to deploy as a Red Cross Public Affairs Officer (PAO). In particular I provided PAO support during the San Jose Flood (February 2017), the Santa Rosa Fire (October 2017), The Mendocino Complex Fires (August 2018) and the Camp Fire (December 2019).

In the following paragraphs I’ll cover some of the issues surrounding the information environment in disasters based on my personal experience.
Let me emphasize that my work here was totally Red Cross work, there was absolutely no military connection whatsoever except my hat. I found that most people relate very well to retired military.

The San Jose Mercury News, “San Jose mayor: Clear ‘failure’ led to record flooding” ( see: https://bayareane.ws/2L3TCH9; the source for the map is the City of San Jose, CA.)  What made this particular disaster unique was the fact that it impacted two entirely different ethnic communities, the Latino community and the Vietnamese community. Each of these communities had their own broadcast, print and social media outlets. Working with them required an understanding of the underlying culture and language as well as a knowledge of their particular community was impacted. 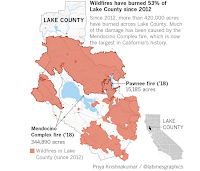 Lake County has had a great deal of experience with wild fires. The graphic shows the almost 350,000-acre area burned by the Mendocino Complex Fire. (source: https://lat.ms/2ZFt57j) Clear Lake is the body of water dead center of the map.

Community radio was a highly trusted medium. My Red Cross Boss asked me to investigate the nature of information being broadcasted by 88.1FM. KPFZ (kpfz.org) from Lakeport, CA (on the southeast end of Clear Lake. As you can see, it was right in the heart of the area impacted by the fire. With studios in downtown Lakeport, CA they have a diverse programming portfolio and are highly trusted, in particular they appeared to be the most highly regarded by residents of Red Cross Shelters.

My role was to be the Red Cross Ambassador on live, unscripted ‘talk radio”.

The deadliest fire in California history accounted for 85 fatalities. That fire started on November 8, 2018. I arrived there just before Christmas. While my role in the previous disasters was more direct since the recovery effort was just beginning, the Camp Fire was different. My role was to provide PAO support to the 700 or so residents of the Red Cross Shelter at the Silver Dollar Fairgrounds in Chico.

There was very little media interest by the time I arrived in late December. My role was more of a catalyst for the media. For example, I helped the Chico based Enterprise Record understand the rules of interviewing people in Red Cross facilities and helped their reporter and photographer during the researching and interviewing.

Chico Enterprise Record, “An evacuee’s Christmas: Just another day“ see: http://bit.ly/2VG7har, which is a photo source. 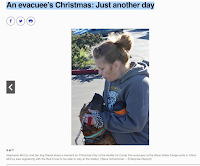 Interestingly enough I was engaged through the Red Cross National HQ to work with the advance planning for a major article for Vogue magazine. One of their staff came out a couple of weeks prior to the scheduled shoot. I gave him a detailed guided tour of the facility and made sure he understood the nature of the rules for shelters and protecting resident and volunteer privacy. The article appeared in early March at  “This Side of Paradise” (see: http://bit.ly/2XZtbpP, another photo source)

As you can see, there are some very significant challenges working to support Civil Authority Information efforts. Unfortunately, I don’t believe that the PSYOP/MISO force has had sufficient training and exposure to be able to just jump right into these kinds of missions.

Photos are identified with sources, those that are not are the author’s personal photos and subject to Copyright protection.
Posted by Lawrence Dietz at 5:14 PM No comments: