The article cites a 6 January intelligence report “Background to “Assessing Russian Activities and Intentions in Recent US Elections”: The Analytic Process and Cyber Incident Attribution” (which you can find at: https://www.dni.gov/files/documents/ICA_2017_01.pdf) . The Key Judgment found on page iii of the report is:
“Russia’s State-run propaganda machine contributed to the influence campaign by serving as a platform for Kremlin messaging to Russian and international audiences.”

The report cited several points that my Blog readers might find of  interest:

By their nature, Russian influence campaigns are multifaceted and designed to be deniable because they use a mix of agents of influence, cutouts, front organizations, and false-flag operations. Moscow demonstrated this during the Ukraine crisis in 2014, when Russia deployed forces and advisers to eastern Ukraine and denied it publicly.  (Page 2)

Russia’s state-run propaganda machine—comprised of its domestic media apparatus, outlets targeting global audiences such as RT and Sputnik, and a network of quasi-government trolls—contributed to the influence campaign by serving as a platform for Kremlin messaging to Russian and international audiences. State-owned Russian media made increasingly favorable comments about President-elect Trump as the 2016 US general and primary election campaigns progressed while consistently offering negative coverage of Secretary Clinton. (Page 3)

Putin’s public views of the disclosures suggest the Kremlin and the intelligence services will continue to consider using cyber-enabled disclosure operations because of their belief that these can accomplish Russian goals relatively easily without significant damage to Russian interests.  (Page 5)

RT's criticism of the US election was the latest facet of its broader and longer-standing anti-US messaging likely aimed at undermining viewers' trust in US democratic procedures and undercutting US criticism of Russia's political system. RT Editor in Chief Margarita Simonyan recently declared that the United States itself lacks democracy and that it has "no moral right to teach the rest of the world" (Kommersant, 6 November). Page 7)

It is important to point out that Russian propaganda efforts are aimed at further their economic goals as well as pointed out in this comment on Page  8:
RT runs anti-fracking programming, highlighting environmental issues and the impacts on public health. This is likely reflective of the Russian Government's concern about the impact of fracking and US natural gas production on the global energy market and the potential challenges to Gazprom's profitability (5 October).
The Russians understand the importance of social media as shown by a chart on Page 11 which featured this chart: 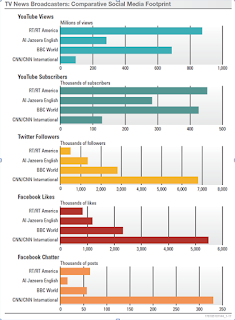 The implications for the PSYOP community are clear – we need to be as familiar with nation sponsored, strategic communications as we are with leaflets. The importance of Social Media such as Twitter and Facebook when combined with the visual power of well-viewed videos such as found on YouTube cannot be underestimated.

The Blog and I are taking a well deserved hiatus. We’ll be backed after the New Year.

All the best to you and yours for the New Year.
Posted by Lawrence Dietz at 9:04 PM No comments: