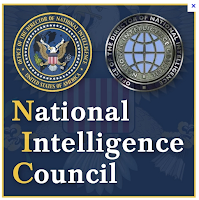 The National Intelligence Council Forecast Megatrends (see http://www.defense.gov/News/NewsArticle.aspx?ID=118766). Once upon a time the US was considered to be too focused on quarterly results to have the wherewithal to perform ‘basic research’. That research which doesn’t lead to immediate results. Perhaps we in PSYOP need to take a moment and consider a couple of the Mega trends that were noted in the above December 11, 2012 article.

1.                   Individual Empowerment
The council believes that there will be a significant decrease in global poverty with a corresponding increase in the middle class. Normally considered good news, this could prove to be very fertile ground for terrorists to recruit those who either didn’t make it into the middle class, or who feel guilty or unhappy about being there and may be susceptible to fundamentalist recruiting.

2.                   Diffusion of Power
The world would no longer be dominated by the US economy but by China, Brazil and India with other contenders such as Indonesia, Colombia, South Africa and Turkey find their comparative fortunes increasing. This is very likely to mean that MISO will be conducted in new and potentially different places such as South America, Africa and South East Asia.

In addition the report pointed out that demand for food, water and energy will grow significantly as climate change accelerates “amplifying existing weather patterns.”. There are no drives more basic than shelter, food and water. When citizens cannot get what they feel they need, there is frustration with the government and where there is frustration there can soon be conflict.

As we look forward to 2013, let’s pause a moment and remember those who are no longer able to be with us and give special thanks for families, comrades and friends.

The very best to all of you for the holidays and for the New Year.
Posted by Lawrence Dietz at 3:27 PM