If MI is Deploying A Bde HQ – What About PSYOP/MISO?

I knew I was under the gun to post something today and was concerned I couldn’t find anything of interest until I found this piece of ‘news’. 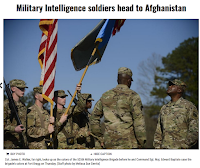 On March 10, 2017 the Fayetteville (NC) Observer published an article headed “Military Intelligence soldiers head to Afghanistan” (see: http://www.fayobserver.com/news/20170309/military-intelligence-soldiers-head-to-afghanistan; which is also the photo source). The article noted: “The brigade will assume the mission of Task Force Observe, Detect, Identify and Neutralize (ODIN), which is an Army aviation battalion chartered in 2006 to conduct reconnaissance, surveillance and target acquisition operations to defeat the threat of improvised explosive devices.
The battalion has been used to “win back the roads,” by conducting persistent missions over at-risk areas for improvised explosive devices, according to the Army.”

According to the Bde’s website “We are the Army’s Intelligence BDE of choice; providing rapidly deployable, multi-discipline support tailored to the warfighter. The Lightning BDE’s core tenant is P.R.I.D.E.-Professional, Ready, Innovative, Dedicated, and Effective.” (source: https://www.bragg.army.mil/index.php/units-tenants/xviii-airborne-co/525th-expeditionary-military-intelligence-brigade)

On March 15, 2017 Task and Purpose reported that “US Draws Up Plans For 1,000 More Troops in Syria as Raqqa Siege Looms (see: http://taskandpurpose.com/us-draws-plans-1000-troops-syria-raqqa-siege-looms/; source for photo at left.)

There have also been calls for bolstering US Troops in Afghanistan as featured in the NY Times of February 9, 2017 (“U.S. General Seeks ‘a Few Thousand’ More Troops in Afghanistan”, https://www.nytimes.com/2017/02/09/us/politics/us-afghanistan-troops.html?_r=0; photo source as well.)

I cannot comment on whether all of these developments are related, however, it does seem pretty clear that the OpTempo is picking up yet again. Given the current MISO Force strategy wherein the USAR PSYOP Groups support ‘the Big Army” and the active MISO Force supports Special Operations Forces this can only mean more action for both.

The MISO community is a small one and any OpTempo increase impacts the entire community.  This puts more pressure on the Reserve Force whose members have deployed extensively to Iraq and Afghanistan. These deployments have put pressure on families that may translate into a reduced Reserve force as family members are fatigued with prolonged absences and reenlistments decline preciptiously.

From a career perspective, even though Reserve soldiers have the protection of the Uniformed Services Employment and Reemployment Rights Act of 1994 (USERRA) many careers have been torpedoed by repeated absences that are often not offset by comparable increases in health care and pension benefits.

Experience has shown that dominating the influence battlefield is the key to long-term victories. Iraq has clearly shown that failure to work with the country’s population and prepare them to help rebuild their will lead to yet more conflict.

Notwithstanding the impact on the Force, it would seem that America’s longest war in Afghanistan is nowhere close to ending. One wonders if we have learned our lessons from both Iraq and Afghanistan and if current our military strategy is putting as much emphasis on influence warfare as it seems to be on military operations and training.

Failure to help mature the media landscape to help foster peace and prosperity in Afghanistan and Iraq may turn out to be more catastrophic in the long run than any lapse in military expertise.