A POTF FOR ISIS? 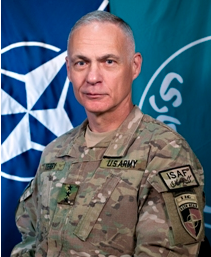 On December 5, 2014 the Washington Post published an article: “New US Military Command Established for Iraq and Syria Operations” (see “http://www.washingtonpost.com/news/checkpoint/wp/2014/12/05/new-u-s-military-command-established-for-iraq-and-syria-operations/).

The article indicated that LTG James L Terry was designated CDR of Combined Joint Task Force (CJTF) – Operation Inherent Resolve in addition to his current duties as CDR of the Army Component of CENTCOM (ARCENT).

According to the article LTG Terry was supposed to provide a briefing on the changes engendered by the new Command on Friday the 5th. A check of the Pentagon issued a Press Advisory that noted that the briefing had been postponed until December 18, 2014 at 10 AM EST. (See: http://www.defense.gov/Advisories/Advisory.aspx?AdvisoryID=3691)

Given the challenge facing him, LTG Terry is wise to gather his thoughts and resources first, figure out what impression he wants to make on the world stage, then enter it.

The NY Times published the map a right to show ISIS controlled areas in November 2014. It’s no coincidence that ISIS’ AO is Syria and Iraq. It’s also no secret that ISIS is a new kind of enemy, one that is borderless, and in many ways amorphous.  (See: http://www.nytimes.com/interactive/2014/06/12/world/middleeast/the-iraq-isis-conflict-in-maps-photos-and-video.html?_r=0)

Appointing a single CDR to deal with this threat is in keeping with the principle of Unity of Command and makes a great deal of sense on many levels. The rank of the CDR indicates a Corps Level Command which Normally implies a pretty big HQ element.

In this I would argue that smaller would be better. Operations against ISIS need to be characterized by swiftness and flexibility. The enemy has interwoven itself into the civilian population and can ebb and flow within the population, as it needs to in order to defeat allied efforts against them.

The PSYOP support must be equally supple. The range of MISO resources needed to support this new type of CJTF is mind-boggling. On one hand tactical elements are needed as is normally the case and on the other, strategic resources need to be on call to deal with events that have global significance such as murder of hostages, massacres and the like.

GO HQ are often lumbering beasts often encumbered with big staffs and meetings upon meetings. This one needs to be different.

That new US HQ could do well to request, integrate and include PSYOP-qualified SMEs from the armed forces of Jordan and Saudi Arabia, plus some Syrian and Iraqi Kurdish 'peshmergheh' fighters who have received and countered propaganda efforts by Daesh (aka ISIS / IS / ISIL et al in non-Arab media).

Both the Jordanian and Saudi Arabian land forces have a number of graduates (now somewhat senior in rank, but still skilled in PSYOP) from the earlier POOC conducted by USAJFKSWCS. They are especially intuitive and insightful about counter-propaganda (or "inoculation," as they call it) against external propaganda/PSYOP (i.e. emanating from Iraq during ODS and from Daesh now

Thanks for the great feedback! Let's see what some of the more 'current' folks have to say.