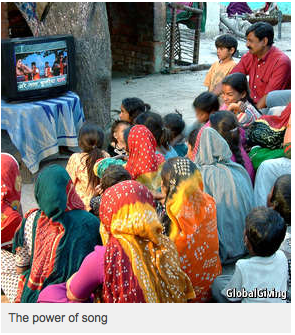 I am an avid reader of the Economist for a number of reasons. First of all, as a British publication they can get away with saying things American Pubs simply cannot. Secondly they are generally, not always, but generally – pretty good journalists.

My addiction to the Economist was jump started in Bosnia when I got my issue a couple of weeks late. I used those past issues as sort of the “teacher’s edition” because it was the only way I could figure out what happened while I was there.

The April 25, 2015 edition of the Economist had an article entitled: “Literacy in India – A bolly good read”. (See http://www.economist.com/news/asia/21649537-india-tries-cheap-and-cheerful-way-teaching-people-read-bolly-good-read, which is also the photo source.)

The essence of the article is that same language subtitles are employed as a tool to help people learn their own written language. Television has often been touted as a good way to learn a language.

Watch a movie you’re familiar with and you can actually match your English brain with the language being spoken by the characters on the screen.

The article quotes the research firm Nielsen whose work shows that by exposing children to 30 minutes of subtitled films/songs the percentage of exposed children that become good readers doubles from 25 to 50%.

What does this have to do with PSYOP?

In the Internet age many of us have watched broadcasts in a language not our own and we have relied on voice over translations. What would happen if these foreign language broadcasts – even English ones to other audiences – used subtitles?

What  is the potential to subvert the subtitles from an accurate or literal translation to one that favors your position or the actions you would like the audience to take?

Could this type of PSYOP be executed on smart phones as well?

I’ll leave it to you!

Posted by Lawrence Dietz at 5:29 PM