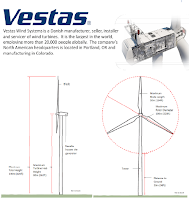 I’m up in Idaho, my favorite PSYOP laboratory. It’s a great laboratory because the rural town we frequent is more or less isolated from the media and the pace is quite a bit slower than our Silicon Valley home base. On June 7, 2011 I wrote a post about people ultimately believing what they want to believe concerning the building of a wind farm.

In that post I explained that many of the local population were upset because of what they perceived as secret goings on and collusion between government, specially chosen farmers who have leased land for the wind farm project and other co-conspirators.

As it turns out, there was a ‘blade signing’ for dignitaries including the City Council, the Mayor, the local newspaper and other special guests. Security precautions were ‘tight’. Invited guests only – please and you had to have a badge to get on the bus from the High School to the site.

As many times as I’ve looked down the freeway I have not seen any camels with riders toting AK47s, but the threat level must have been high. To be fair thought, there was a report of a man in a Bunny Suit terrorizing children in Idaho Falls. Perhaps it was because the LT Governor was invited, although you would have to work pretty hard to find his schedule from the official website (http://lgo.idaho.gov/).

While a certain amount of security is always reasonable, your level of security depends on the threat. In this case the perceived threat might have been those farmers who missed out on the lease money and might have made the event less festive.

From a MISO/PSYOP perspective the point is that what a force does has psychological impact. Commanders must be made aware of the potential repercussions of offensive and defensive operations. MISO can help by campaigning to insure that all audiences are aware of what is going on and the truthful reason the operation is conducted.

Nevertheless, the enemy will exploit anything they can to support their propaganda campaigns. Given that the enemy enjoys a ‘home court’ advantage much of the time, MISO/PSYOP should be aggressively employed via credible local spokespeople to minimize the negative effect of necessary military operations.

Posted by Lawrence Dietz at 9:05 AM