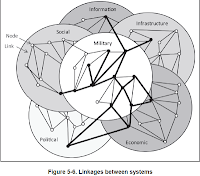 The Army is not often accused of being a forward thinker. The January 2013 release of FM 3 -13 “Inform and Influence Activities” (see http://armypubs.army.mil/doctrine/DR_pubs/dr_a/pdf/fm3_13.pdf) may actually be one of these times.
The introduction makes an interesting yet uncharacteristically visionary.
“Today’s global information and communications environment means that messages and actions delivered to one audience also reach other audiences. The Army’s concept of IIA is the integration of information-related capabilities that informs and influences audiences simultaneously.”

A new primary staff officer the G/S7 is identified thus elevating the IIA function to a senior level within the CDR’s inner circle and an upgrade from the special staff designator given to the IO officer as a subordinate of the “3”.

The manually unceremoniously declares IO assets, IO capabilities, IO cell, computer network exploitation and computer network exploitation as rescinded and offers up the new terms of information-related capabilities and “soldier and leader engagement”.  Other IO terms are removed from the lexicon and no longer formally defined. These include IO mission statement, objectives, resources, tasks and vulnerabilities. However it is important to point out that the FM urges the reader to “See JP 3-13 regarding information operations.”

While this all may be a good start, the cyber element and some others are not embraced in the new “Inform and Influence” paradigm. The manual also pays a certain amount of attention to Strategic Communications which was de-emphasized late in 2012 while the manual was in development.

Other positive elements include the recognition for the need of synchronization and avoiding information fratricide. The manual also recognizes the critical and constant role of Leaders and Soldiers:
Leaders ensure Soldiers stay continually aware of current messages and consider them during conduct of operations and when engaging with the audiences in their area of operations. Through training and command information efforts, commanders empower Soldiers to influence foreign audiences significantly.

This addresses key lessons learned in Afghanistan and Iraq that everyone in the battlespace is under a spotlight and that action or inaction conveys messages that can reinforce or damage the operation at hand.


Activities in support of inform and influence include:


Based on a cursory reading, the IO Working Group morphs into the IIA Working Group with the players and methods reaming pretty much the same in both. Chapter 8 addresses the principles of Soldier and leader engagement.

·         Successful Soldier and leader engagement is:


While the manual certainly appears to be a step forward, it is hard to say how CDR and other leaders will implement its principles, especially under the duress of combat situations. Hopefully the manual is evidence of the criticality of information dominance in the conflicts of the future.

" A word of caution to my PSYOP and MISO colleagues": The New FM 3-13 is a double edge sword, which may yet prove to be more of a course for the 'MISO' community than a blessing. The FM 3-13 is not nested with joint doctrine, nor it is supported by the Army's sister services (as the previous FM 3-13). Furthermore, the FM 3-13 and its IIA concept, is nothing more than a thinly veiled attempt at reintroducing the whole failed Information Engagement premise. It does nothing more than continue to blur the lines between MISO and IO/IIA, and PA. Furthermore, it completely ignores the more "technical Information Related Capabilities" such as CYBER and EW, which often pack the greater punch and set conditions for success for MISO and other "Maneuver to Inform" initiatives. Now the US Army has compounded the problem by trying to figure out if the G-7 at division and above, while untrained and steered away from such IRCs, may be asked to cover down on Cyber and EW anyway (as has been happening).

Believe me when I say that perhaps you and some of the folks at the USAIPO, might be the only ones happy, if not relieved at the publication of this version of the FM 3-13. I got a well educated feeling that the operational portion of the US Army, along with most of us withint the joint IO COI, don't share your enthusiam. Leavenworth certainly didn't reflect the lessons learned or feedback from the Force. You better hope that it does not suffer the same fate as the vaunted IE chapter from FM 3-0.
The reality is that the FM 3-13 took an entire decade to be published, and it was done so despite of and after overwhelming amount of non-concurrence from throughout the Force. Unfortunately this manual was published because "it was overdue", and it does not reflect the reality of the Army and other sister services officers that have to conduct "Information Operations" in a joint environment. This fact should not be lost on current and future G-7s.That is the "White Mammoth in the room". So celebrate all you want, but the current FM 3-13 will not prepare you or anyone else to conduct IRC integration within a joint and multinational environment.
If the current state of affairs continue, The G-7 and the MISO career may yet be merged. Be careful what you wish for because at the end of the day, there will always be a need for professionals to integrate Information Related Capabilities and incorporate Information environment considerations into planning, thus MISO officers may end-up becoming Defacto IO officers, and be pulled away from the time proven and crafted expertise of influencing behavior. If this is what you want, then celebrate. I know that the really talented PSYOP and MISO operators, those that know their craft, know how to employ people skills, and lead by professionalism, have no problem integrating MISO alongside other Information Related Capabilities, which embodies the very definition of Information Operations. It was that integration done by bonafide S/G-7s and J-39, what brought PSYOP and MISO to reach an even greater potential that anyone could have imagine, as it allow for tapping into the JEMSO as a critical enabler and conduit for their operations. This would not have been possible without the original FM 3-13, which provided the clear delineation of the IO officer as the integrator, and the PSYOP/MISO Operator as the SME on influence to achieve advantageous behavior for friendly elements.

This is not a dig at a particular community. I hope that in blogs such as this, that are part of the COI, we can at least be honest amongst ourselves. Furthermore, I hope that our sense of duty and professional pride helps to put a stop to the bickering and information fratricide that has been self inflicted for the past decade.

I was asked the other day by a CGSC collegue, "How come the PSYOP and IO guys never get along?" It was a question I'd often pondered myself for sometime, having worked in PSYOP for almost 12 years. After completing the Information Operations Qualification Course in April 2012, I think I am now better equipped to answer that question.

First and foremost, much of the strife is caused by the fact that PSYOP and IO officers simply don't understand the other's doctrine and mission. We often are more caught up in the struggle of who's in charge and who owns what. However, when we put aside our petty power struggles and work toward the common good, PSYOP (MISO) and IO (IIA) can work in harmony toward a common goal.

I echo Anonymous' concerns that FM 3-13 is not the complete solution and does not exactly nest with JP 3-13. However, getting FM 3-13 on the streets is an accomplishment in itself and will help to clarify much of the confusion that has plagued IO/IIA for sometime as they implemented new doctrine on the fly without having the document to back it up. Even as I went through the IOQC, the doctrine was evolving. This is where IO/IIA has often caused confusion, but constantly shifting doctrine before the previous doctrine had time to take root in the Army.

One item I can say with certainty that they got right was incorporating design methodology. Having spent a good deal of time on design methodology in the IOQC, I was well-prepared for its introduction during CGSC.

Discussions will continue for years to come on whether PSYOP/MISO should absorb IO/IIA or vice versa. Either way it washes out, understanding each others doctrine is key. Cross-training is the wave of the future, so we should get on board before we get run over by the oncoming train.

This is an oldie but goodie. I recall someone saying: "It seems that rumors of my demise may have been premature". I previously commented on this topic back on FEB 2013. I specifically cautioned everyone to be weary about a likely rescinding of the then emerging US Army IIA policy. Well that is exactly the case, just like the chapter 7 of the then FM 3-0, and the IE construct was rescinded as well. Both of those concepts well not only ill conceived, but highly unfavorable within a great sector of the US Army community. Unfortunately there was a lack of intestinal fortitude to voice effective objections, and many within the Army establishment allow themselves to be steamrolled by the IIA tide. The end result was not only much confusion throughout the joint community, but furthermore dragging our allies through that rabbit hole. Thank God that the US Army leadership finally decided to right this wrong. The PSYOP/MISO community should even be more excited, as they should avoid any further confusion between them and IO. MISO/PSYOP warriors are outstanding at what they do, and that is to provide expert advice on what their IRC brings to the table. They don't need to build any larger fiefdoms by trying to take over MILDEC or even Cyber enabled initiatives. Any kind of integration of IRCs is IO. That is our national joint doctrine, and that is how we should conducted.