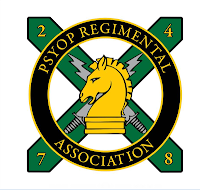 It is with great pleasure that I am pleased to report that the PSYOP Regiment finally has an association.

After more years in the making than I care to remember, the PRA was officially launched on 22 February 13. The website is www.PSYOPRA.com and the organization is based, logically enough, at Fort Bragg, NC.

The formation of the PRA marks the culmination of years of efforts. According to the organizations’ press release the PRA “has been officially recognized by the PSYOP Branch Proponent at the US Army John F. Kennedy Special Warfare Center and School”. This is an important milestone because it bridges the gap from informal group to formal organization and forges a critical link to the force.

“The vision of the PRA is to become the premier PSYOP advocate by hosting social events, professional lectures, formal balls, competitions, and publishing and distributing an Association publication.  The purpose of these efforts is to ignite PSYOP pride, invigorate PSYOP tradition, and create a sense of belonging not just for 37 officers and NCOs of the Active and Reserve components, but for the printers, the broadcasters, the graphic designers, civilians and anyone, past and present, who have played a role in our regiment's success. We believe that, like other Army branches, the members of the PSYOP community deserve a proactive organization that fosters pride in our profession among all who have ever served or supported a PSYOP unit or PSYOP mission in both the Active and Reserve components.” (Source for the quote and the photo: PRA Website).

The PRA is now accepting members and complete information can be found on their website.

Fittingly enough the PRA will hold its inaugural meeting on 4 March 13 from 1500 to 1600 at the Kennedy Hall Auditorium, Building 3004, Ardennes Street, Fort Bragg NC. The date is significant because it marks the 115th anniversary of the birth of MG Robert A. McClure, father of modern PSYOP and the namesake for the Regimental Award.

As a former Honorary Colonel of the PSYOP Regiment, I am delighted to offer my congratulations to the founders of the PRA and wish them well on their journey. I encourage all of my readers to support the fledgling PRA in its efforts.
Posted by Lawrence Dietz at 4:57 PM